Showing posts from February, 2021
Show all

The Sacred in Art. 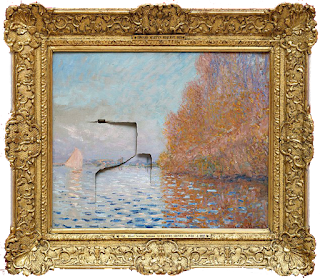 Claude Monet’s "Argenteuil Basin with a Single Sailboat" (1874) As vandalized in 2012. Sacred (from the Oxford English Dictionary) ... 4) Regarded with or entitled to respect or reverence similar to that which attaches to holy things 5) Secured by religious sentiment, reverence, sense of justice, or the like, against violation, infringement or encroachment. What is the “sacred” in art? To ask that question brings up images of religious significance. Statues and paintings of saints, the illustration of words of religious wisdom; this is art created to express the glory of a god or to communicate the theology and authority of a religion. The vast memorial of art through the ages is an encyclopedia of deities. Artists manifest the gods of Sumer and Egypt, buddhas and saints, demons and angels; rendering the spirit world visible to inspire devotion, or fear. But these are simply exercises in illustration, for there is in the image of a god nothing intrinsically sacred. The sacre
1 comment
Read more
More posts